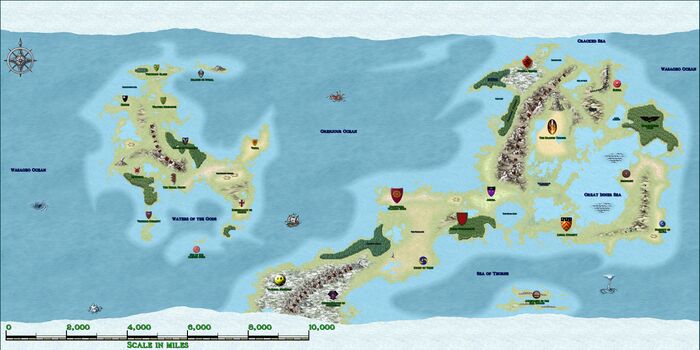 There are three well-known locations in Liras that have permanent teleportation circles that the runes for are learned with the spell Teleportation Circle. These locations are so well known for their centrality to the Masked Gods Pantheon, the boundless rumors floating about it, or its plain infamy.

Located via the runes <1104.1355>, Fort Bluff is the fortified entry port to the See of the Masked Gods. Pilgrims and traders are frequent visitors.

Located via the runes <3000.1609>, Tyrossos is a well-known trading port for the Athenaeum of the Far Realms. Rumors about what happens towards interior, on the other side of the southern moor run wild through the traders that call on the chilly port.

A small town located via the runes <3070.0610>, Chacatas is nestled at the entrance to the Flying Pass, the known path through the Stelnear Mountains to reach The Dragon Throne. Not the capital city, but the seat where Great Red Dragon Bemrainoir is said to watch over his demense. Many have attempted the journey to see the great dragon. Few have returned, none successful in their quest.